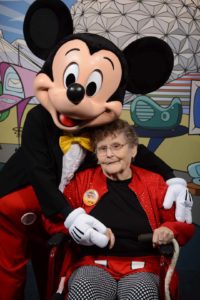 Mary Lillian “Mike” Showden of Clarion, PA passed away March 6, 2020 at Vitas Hospice in Longwood, Florida after a brief battle with cancer. She had made her home with her daughters Jodi and Judi Rae for the past two years in Lake Mary, Florida. Mike was born in Mechanicsville, PA on October 13, 1941 to Mary Lillian Fox and Donald James Kuhns, both of whom preceded her in death. She told many stories of life growing up on the farm.

Mike attended Clarion Limestone High School and worked for many years at Community Action in Clarion helping people which was her greatest passion. She was a member of the First United Methodist Church in Clarion, American Legion Auxiliary Post 66 and VFW Auxiliary Post 2145 in Clarion, PA.

Mike never met a stranger and would strike up a conversation with anyone who would reciprocate. She was bold and brassy and was never afraid to speak her mind. In the last two years, her daughters took her on many adventures including meeting Mickey Mouse and Goofy, numerous surprise road trips, and meeting her first great-grandchildren, August and Matilda, in Louisiana.

In addition to her husband, Larry, and her parents, she was preceded in death by a sister Hazel Marguerite Kuhns and two brothers, Glenn Matthews and John Matthews.

A Celebration of Life will be held in the coming months in Clarion, PA. Arrangements are under the direction of Goble Funeral Home in Clarion, PA. Memorial donations may be made to Charitable Deeds and Services in Knox or the Alzheimer’s Association.