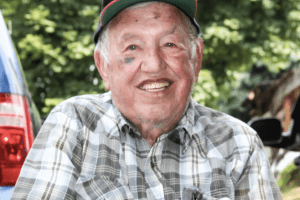 Born in Sligo, PA on 11/21/1921, he was the son of the William and Pearl Frazier Mauthe, both preceding him in death.

He was a World War 2 Veteran, worked at the V.A. Hospital in Butler in the maintenance department. He enjoyed playing cards and the Pennsylvania lottery which earned him the nickname “Lucky”.

He was preceded in death in addition to his parents by a brother Bill Mauthe, a sister Zelda Kifer, a grandson Jeff Fair, a grand daughter Norma Eng, a daughter in law, Mary Mauthe, a son in law Leroy Fair and his long time companion Carrie Fair.

Friends will be received at the Goble Funeral Home & Crematory, 330 Wood St, Clarion, PA. on Thursday February 20th from 4:00 PM to 7:00 PM. Funeral services will be held on Thursday at 7:00 PM from the funeral home with Rev. Nancy Zahn officiating.

Interment will take place in the Cedarview Memorial Park in Strattanville.