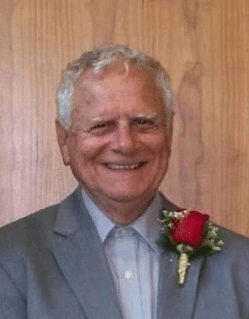 Benjamin Angelo Kundick Sr., 88, of New Bethlehem, died Monday evening, January 13, 2020 at the Brookville Hospital after suffering a sudden illness at his home.

Born December 31, 1931 at home in Seminole, he was the son of the late John Cogie Kundick and Mabel Zamperini Kundick.

Mr. Kundick was a graduate of the New Bethlehem High School and Clarion State College and a veteran of the United States Navy, serving during the Korean War.

He was a member of the St. Charles Catholic Church in New Bethlehem, the Knights of Columbus Father William Smith Council No. 8538, the Fraternal Order of Eagles in Clarion and the American Legion Post No. 354 VFW and the Moose Lodge, all of New Bethlehem.

Mr. Kundick was a Redbank Valley sports enthusiast and enjoyed all levels of youth wrestling. He was also a member of the NRA.

In addition to his parents and wife, he was preceded in death by an infant great-grandson, Gunner.

Family and friends will be received from 4 to 9 p.m. on Thursday, January 16, in the Redbank Valley High School Auxiliary Gym in New Bethlehem.

Mass of Christian Burial will be celebrated at 10 a.m. Friday, January 17, 2020 at the St. Charles Catholic Church in New Bethlehem, with the Rev. Samuel Bungo, parish priest, serving as celebrant.

Interment will follow in the St. Charles Catholic Cemetery in New Bethlehem.

Memorial contributions may be made in the name of Benjamin A. Kundick Sr. to the Redbank Valley Wrestling Club, c/o Redbank Valley High School, 910 Broad Street, New Bethlehem, PA 16242.

Online condolences may be sent to Mr. Kundick’s family at www.rupertfuneralhomes.com.

Arrangements are under the direction of the Rupert Funeral Home and Cremation Service of New Bethlehem.