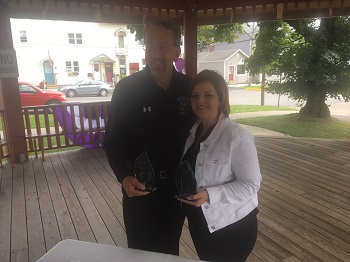 Recover Respects First Responders, an event that thanked local first responders, was held Sunday in Veterans Memorial Park.  A number of people who were saved by first responders spoke, and a many local first responders were recognized.  Recover Champion awards were given to Clarion County Coroner Randal Stom and Rep. Donna Oberlander for their work to help fight the opioid epidemic in Clarion County and efforts to promote the use of naloxone by first responders. Other speakers included people who are in recovery and publicly thanked the first responders who saved their lives. The event was organized by the Armstrong-Indiana-Clarion Drug and Alcohol Commission and C93 news asked the commission’s director, Cami Anderson, to comment on the event. “I was happy with the turnout; we had over 75 people here.   The event gives all of us the opportunity to come out and thank our first responders.  A lot of times when people come out of an overdose, they go into imitate withal, they very sick and disoriented. Thanking  the person who helped or saved them, is not the first thing on their minds, but we have heard from many people in recovery that they would like to have the chance to thank the first responders and today’s event is just that.