CLARION, Pa. – Julia Holden became the 12th player in program history to record 1,000 career kills, and the Clarion volleyball team finished their weekend with a 3-1 (16-25, 25-22, 25-22, 25-18) win over Bellarmine at the Student Rec Center.  The Golden Eagles (2-2) finished their weekend at the Tony Banner Memorial Tournament, with Holden earning All-Tournament Team honors.

Holden’s milestone kill came in the midst of a furious stretch in the fourth set, as the senior tied her career-high with 23 tallies in the come from behind win over the Knights.  Clarion rebounded from a first set loss and won a pair of tightly-contested sets to follow before opening a huge lead in the fourth, and Holden pounded a kill to make it 22-11 to break the millennium mark.

The Golden Eagle servers combined with a stout block to stymie the Knights, with Clarion owning an 11-6 advantage in team blocks.  Holly Pittman and Alyson Peters tied for the match-high with five blocks apiece, while Chrissy Cotton had a match-high 26 digs.  Alexa Cundy dished out 47 assists.

After Bellarmine ran away with the first set, the Golden Eagles put their foot down in the second to balance the scales.  The Knights did hold a 13-10 lead at one point, but the Golden Eagles went ahead 22-20 on an error by Hannah Brown and never relinquished the lead again.  Pittman notched a kill to make it 23-21, and a pair of Bellarmine errors down the stretch gave Clarion the set.  The third set played out much differently as Clarion opened on a 9-2 run.  Though the Knights pulled closer they never took the lead, and Holden bounced a kill on set point to make it a 2-1 advantage.

The fourth set saw another big opening run for Clarion as the Golden Eagles outscored their opponent 7-1 to start the game.  The only drama that remained was whether Holden would notch her 1,000th kill, which she did late in the set to put the dagger into the Knights.  A late error by Jayme Scott finished off the win for Clarion. 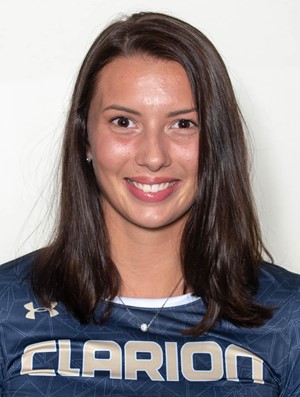