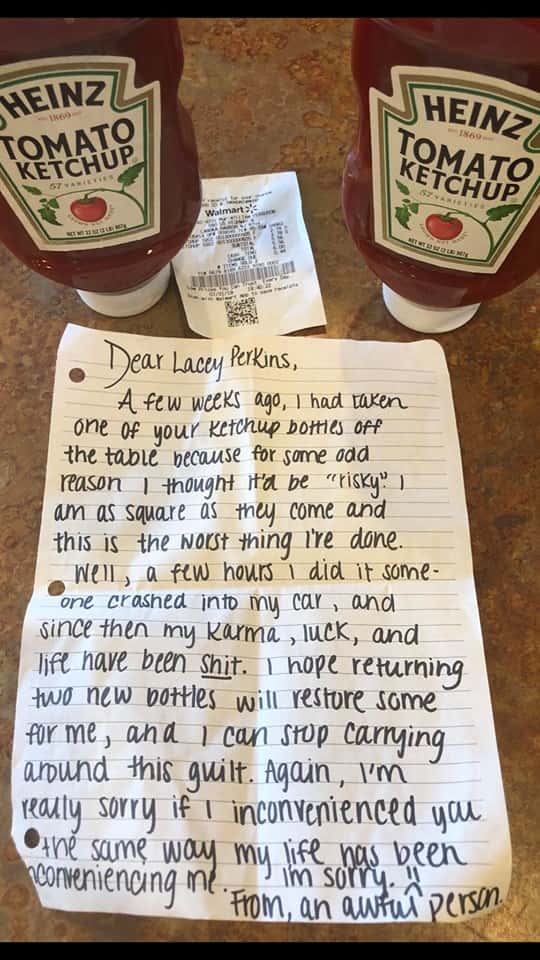 A manager closing up the restaurant on Wednesday (July 31st) found a mysterious brown bag next to the entrance. This bag would contain two new bottles of ketchup (with a receipt to prove these condiments weren’t stolen, as well), and an anonymous letter.

The letter, which the manager shared publicly on Facebook, explains that author stole a bottle of ketchup while dining and feels resentment over their actions.

“I thought it’d be ‘risky'”, the note read. “I am as square as they come and this is the worst thing I’ve ever done.”

The thief noted that just after the incident, his car was hit by another vehicle.

“I hope returning two new bottles will restore [some karma] for me, and I can stop carrying around this guilt.

Again, I’m really sorry if I inconvenienced you the same way my life has been inconveniencing me,” the person wrote. “I’m sorry, from an awful person.”

The manager said the person is forgiven and employees had never even noticed a bottle of ketchup was missing. In fact, the owner letter is to be framed inside the restaurant.

The moral of the story.. Be a good person and Karma won’t ketch-up to you.