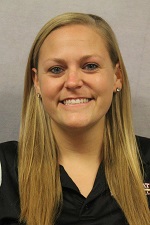 CLARION, Pa. – Director of Intercollegiate Athletics Dr. Wendy Snodgrass announced today that Clarion University has hired Elisabeth Schulz to the position of head softball coach.  She spent the previous four years as the head coach of NCAA Division III Bridgewater College, where she led consistent annual improvement in one of the toughest conferences in Division III.

“I am pleased to announce that Elisabeth Schulz has accepted the position of head softball coach,” Snodgrass said.  “Throughout the search process she displayed all of the qualities we look for in our athletic department and I am confident she will be able to lead our program to success in the near future.

“I’m extremely excited and thankful for the opportunity to be Clarion’s head softball coach,” Schulz said.  “I’m looking forward to getting to know the players and get to work this fall season.  I appreciate all the work that Dr. Snodgrass and the hiring committee put into finding this program a new coach.  I have a lot of respect for Clarion and I am looking forward to representing the school on and off the field.”

Schulz’s tenure at Bridgewater saw her turn the Eagles from doormat to contender in the competitive Old Dominion Athletic Conference (ODAC).  The team improved on their previous seasons’ wins total in each of her four years, starting with 9 wins in 2016 and improving to 10 in 2017, 15 in 2018 and finally a 23-17 season in 2019.  The team returned to the ODAC Tournament for the first time since 2014. Schulz coached five All-ODAC honorees in her four years, including Katrina Martin and Stephanie Carroll in 2019, with the latter a two-time all-conference player.  In 2017, sophomore Mikalia Guard became the program’s first All-Region selection since 2012. She was also a VaSID All-State and CoSIDA Academic All-District selection.

The move to Pennsylvania will not be a terribly jarring change for Schulz, a Gibsonia native that earned two degrees from Westminster and earned four letters as a member of the softball team there.  A four-time honoree on the Presidents Athletic Conference (PAC) all-conference team – including First Team nods in 2010-11 – Schulz helped Westminster to a four-year record of 82-68-1 and was named to the Louisville Slugger/NFCA Division III Central team in 2010.  Schulz ranked second on her team as a senior in both batting average and ERA. She hit .337 with three home runs and a team-best 26 RBIs, while going 9-10 on the mound with a 2.39 ERA and 70 strikeouts.  In 2010, Schulz was 13-4 on the mound with a 1.30 ERA and batted .327 en route to an All-Central Region selection in the utility position.

She went on to serve as a graduate assistant coach during the 2012 season, before starting a three-year stint as an assistant at Geneva College.  At Geneva, Schulz called pitches and coordinated pitching conditioning, coached first base and was heavily involved with recruiting and practice planning.  Geneva reached the 2013 and 2014 Presidents’ Athletic Conference (PAC) championship games and had a record of 65-55 during Schulz’ three seasons as an assistant.

Schulz earned a Bachler of Arts in Communication Studies from Westminster in 2011, and went on to earn a Master of Higher Education degree in 2013.