​HARRISBURG, Pa. (May 7) – The Pennsylvania Fish and Boat Commission (PFBC) is excited to announce a new state record flathead catfish! 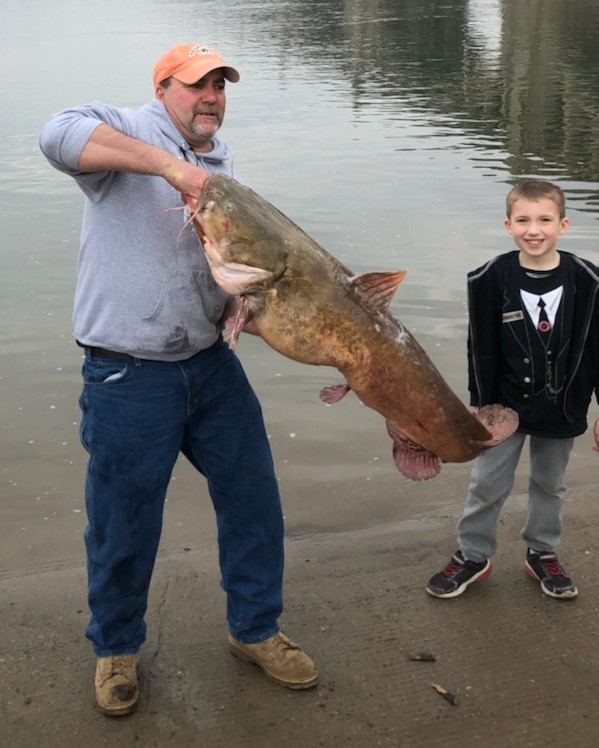 “We had already caught several 30 pounders to that point, so it had been a good day,” said Bonawitz, who was fishing with his friend, Brian Bruce of York. “We were running low on bait, so I decided to use the biggest bluegill we had left. I had a bite and let the fish toy with it for a few minutes. When I finally pulled, it just bent the rod straight down. I could tell it was big. It kept hanging down deep and when it finally came up to the top, we thought it might be a mermaid,” joked Bonawitz. “I’ve fished the Susquehanna for years and I’ve never caught anything quite like it.”

Following a 25-minute fight, Bonawitz brought the fish aboard his boat. After taking some initial measurements, Bonawitz suspected it could be a contender for the state record, which had been previously set in 2006 when a 48-pound, 6-ounce flathead catfish was caught in Blue Marsh Spillway in Berks County. Unable to immediately locate an operational certified scale on which to weigh the fish, Bonawitz kept the fish alive in an aerated container at his home until the following day. On April 7, the live fish was officially weighed at Columbia Bait and Tackle located in Lancaster County, where it tipped the scales at 50 pounds, 7 ounces, unofficially setting a new state record for the species. While the fish was measured at 45.25 inches long with a girth of 31.25 inches, Pennsylvania state record fish are judged only by weight, and must exceed the previous record by at least 2 ounces.

As is required for state record consideration, Bonawitz contacted PFBC law enforcement officials and arranged for an in-person identification and examination of the fish. Waterways Conservation Officer Jeffrey Schmidt conducted the inspection and verified the weight. A completed state record fish application including color photographs was reviewed by PFBC officials and confirmed.

Upon weighing and measuring the fish, Bonawitz with assistance from his nephew, Dylan, 8, released the flathead catfish alive back to the Susquehanna River beneath the Wrightsville Bridge.

“It was such an amazing fish,” said Bonawitz. “I thought the best thing to do was put it back so that maybe the next guy could catch it. I have a feeling this record may not last very long.”

A list of current Pennsylvania State Record Fish, official rules and application can be found at www.fishandboat.co